Bosses are aggressive, powerful monsters, that offers a substantial challenge to players. Defeating a boss is usually give major benefits for the players in some way: by dropping recipes or/and by quest chain advances. 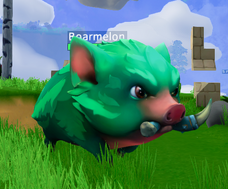 Regular Boarmelon. Royal Boarmelons are bigger and have a crown

Elterian Boarmelons are the most common species of animals – they inhabit almost half of all islands. They are very smart and enthusiastically adopt various habits of others. One of the features they borrowed – is that the strongest and largest specimen in the herd wears a crown. Over time, folks began to call herd's leader the Royal Boarmelon. People love to have fun coming up with amusing stories about the origin of the crown.   Drop:

One of the oldest Plum Octopuses living to this day. It's much larger than its younger relatives and much more dangerous. The magical power of this creature is immense, and only a few in Elteria can compete with the Large Plum Octopus. Fortunately, these creatures rarely live long enough to become so powerful. }} 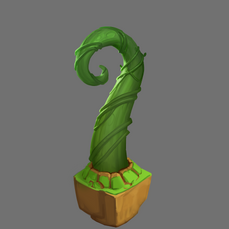 During the cataclysm, many living things and inanimate objects showed new properties and abilities. So did the roots of dead trees, reborn by the magical energy. Motionless and inconspicuous before, they now became a serious enemy for an unwary traveler. Most often they can be found in forests or groves – broken and uprooted trees are a clear sign of their habitat. Such places are distinguished by unusual silence – no rustles, no bird voices. Forest Tentacles will attack anyone who disturbs them by stepping on their territory.