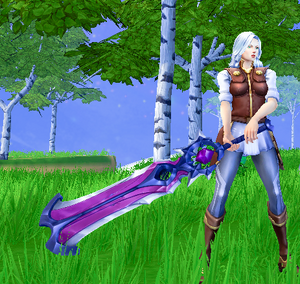 Description in the recipe: In contrast to his colleagues, Leonard focused on the destructive powers of the Dark Gem – he was creating countless prototypes of weapons, which sold well on the black market. The last, unfinished work of the scientist was the blade, in which Leonard sealed his soul in hopes of immortality. After the Cataclysm, the sword was lost for many centuries, during which the scientist had no choice but to feed upon the lives of small creatures, who were unlucky to be nearby.

Quote on item: «The cost of power doesn't change, and blood is the best currency for it» – sealed Leonard's soul.

The recipe drops from chests in the pyramids.

Gives the player ability to toggle between two stances, each with special features: Vampirism – basic attack restores HP depending on the damage dealt; Destroyer – damage of basic attacks is increased, but the player loses HP with every attack.