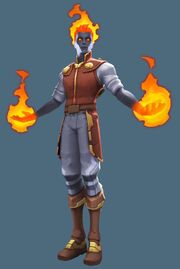 Art for the Demolisher.

The set of abilities of the Demolisher is based around voxel destruction, massive fire damage and scattering opponents around. This makes Demolisher suitable for causing a large amount of damage and disorientation of opponents, but leaves the player vulnerable to the enemy attack, forcing to rely on external support and protection.

Leveling up the Demolisher[edit | edit source]

See more about mechanics in the article: Callings

Abilities with the higher level replace their weaker counterparts.

Fifth level of the primary Calling changes the appearance of the character - hair, hands and feet will always be surrounded by flame.

Demolisher's abilities are focised mainly around ranged combat. The best way to utilize them would be to inflict a lot of damage to the enemy and then change the position - keeping distance.