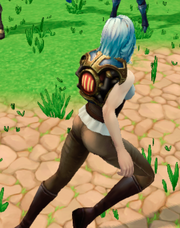 Screenshot of the Explosive Core in game

Description in the recipe: During the Magical Rush, the Averdeen's Army received prototypes of weapons of mass destruction, based around Lava Gems. However, tests revealed how unreliable every prototype was, so much that soldiers jokingly called them Unstable Cores.

Quote on item: «I'm always not sure who will suffer more from it – our enemies or us» – inknown soldier.

Explodes on activation, inflicts magical damage to all enemies in the cone and pushes the holder away by ten meters.