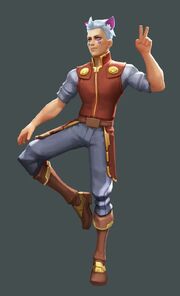 Art for the Trickster.

Abilities of the Trickster will strengthen allies and weaken opponents in a number of cunning ways, giving their team tactical advantage. For example, there is an ability to change the physical size of allies (or opponents), which changes the reach of their abilities and gives access to previously inaccessible terrain elements. Trickster is best at supporting allies and controlling the enemy.

Depending on the gender, character will get either cat or bunny ears with fifth level of the the primary Calling. Also, their pupils will turn violet.

After the Awakening, card suits are added to the Trickster's appearance

Trickster is more of a "caster type". The best way to utilize his abilities would include a lot of movement, accumulation and then activation of Trickster's Marks.