Elteria - the main world, where all the actions of the game take place. It consists of floating islands, differing in types, sizes, and difficulty tiers. In general, players can't get to the neighboring island by using their abilities and must find a portal or a Jump Mushroom to travel. Islands can be in archipelagoes or as one big. An archipelago is considered the same as one big island. The player can seamlessly travel between sub-islands in an archipelago with jump mushrooms, but to travel to a logically different island, the player will need a portal.

There are several biomes in the game. One island usually consists of one to three biomes, e.g.:

The island type is defined by the prevalent biome.

Islands are divided by difficulty in tiers. To access the new difficulty level, the player needs to achieve a major game goal, such as: kill a boss, finish a quest chain, etc.

Only passive monsters and traps on the surface, but some aggressive monsters can be found underground. Limited gem and other resources spawn rates. No advanced artifacts, mostly ones needed to advance forward. First tier meant to let the player learn how to play. 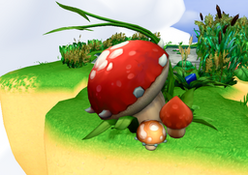 Jump Mushrooms serve as the main way to travel between local islands in one archipelago. It is a one-way journey, but there is quite a lot of them around, so you always can find a way back. 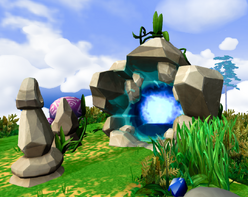 A portal, leading to another island

Portals teleport players between islands instantly. There is a small chance that several portals are merged into one pool - in which case the exit point will be selected randomly, but usually, they connect only two islands of the same type

Elteria once was a beautiful world inhabited by all kinds of people. It was a place similar to Victorian London — bubbling with life and constantly evolving. But everything changed with the discovery of new properties of the very fabric of reality. Civilized world was swept away by Magic Rush – every scholar dived into the new branch of science trying to make a breakthrough.